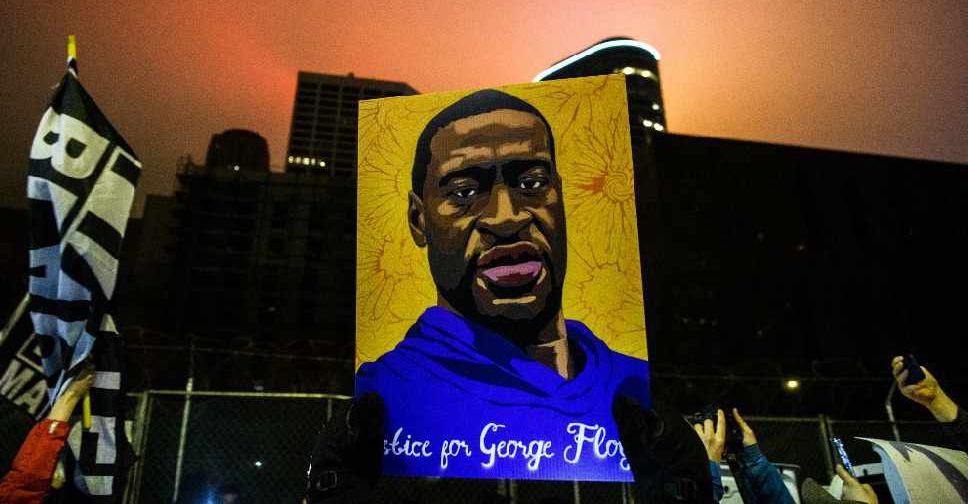 Prosecutors have neared the end of their case in the murder trial of former Minneapolis policeman Derek Chauvin, calling George Floyd's younger brother to the stand for an emotional testimony.

"He was a big momma's boy," Philonise Floyd said after jurors looked at a picture of his older brother in his mother's arms while Chauvin sat across the courtroom, writing notes on a yellow legal pad with his head down.

The younger Floyd, who at one point broke down in tears, was among the final witnesses called by the state. Prosecutors are expected to rest on Tuesday after finishing some procedural matters, calling no more witnesses.

Chauvin's lawyers will then mount his defence, with closing statements expected next Monday.

The 45-year-old has pleaded not guilty to murder and manslaughter charges, arguing he was following the training he had received during his 19 years on the force.

Philonise Floyd's testimony served as a bookend to a string of eyewitnesses the prosecution called in the first days of the two-week-old trial. From a 9-year-old girl to a 61-year-old man, the witnesses described their despair and horror as they watched Floyd, a 46-year-old Black man, plead for his life while pinned by the neck to the ground by the white officer's knee for more than nine minutes.

Sandwiched between them and Floyd's brother was a series of police experts, including the Minneapolis police chief himself, called by prosecutors from the Minnesota Attorney General's Office to testify that Chauvin used excessive force in subduing Floyd.

Seven doctors with different medical specialties told the jury it was Chauvin's actions that killed Floyd, not a drug overdose, as the defence has contended.

Floyd's brother was called under a Minnesota doctrine that allows loved ones of a crime victim to address the jury in what is called "spark of life" testimony.

Prosecutors also used the brother's testimony in a bid to pre-emptively undermine the argument advanced by Chauvin's lawyers to convince jurors that Floyd died of a drug overdose, rather than by homicide at the hands of police, as the medical examiner ruled.

Before his arrest, Floyd was heard on video telling officers that he was "hooping" earlier. Eric Nelson, Chauvin's lead attorney, has contended the term "hooping" is urban slang for taking drugs rectally, a theory that prosecutors have ridiculed.

After showing photographs of a young George Floyd dressed in an orange basketball uniform, prosecutor Steve Schleicher asked the brother: "When he would talk about playing basketball, would he use any particular term or phrase?"

"He said: 'Let's go hooping,'" Philonise Floyd replied. "We always went hooping. You have to hoop every day."

Before the jury arrived on Monday, Chauvin sought to have its members sequestered in light of the fatal police shooting of a Black man at a traffic stop on Sunday in Brooklyn Center, a suburban city just north of Minneapolis.

Hennepin County District Judge Peter Cahill denied the request, although he planned to sequester jurors by confining them to a hotel once they begin deliberations in downtown Minneapolis, which is already heavily fortified against potential unrest based on the outcome of the high-profile trial.

DOTED ON HIS MOTHER

Philonise Floyd told the jurors about family life when the two brothers were boys. They would love trying to beat each other at Nintendo video games, he said, and were raised with their three siblings in a Houston housing project by a mother everyone in the community called Miss Cissy.

There were marks on the wall left as the adolescent George Floyd checked his height, hoping to grow big enough to be a basketball player. George Floyd would end up well over 6 feet tall.

Philonise Floyd added his brother was thoughtful as a youngster.

"George couldn't cook, he couldn't boil water," the brother said, but could nonetheless make "the best banana mayonnaise sandwiches" if he thought others were hungry.

George Floyd doted on his mother most of all, his brother said.

"He would always be up on our mom. He was a big momma's boy," he told jurors. "He would lay upon her in the fetal position like he was still in the womb."