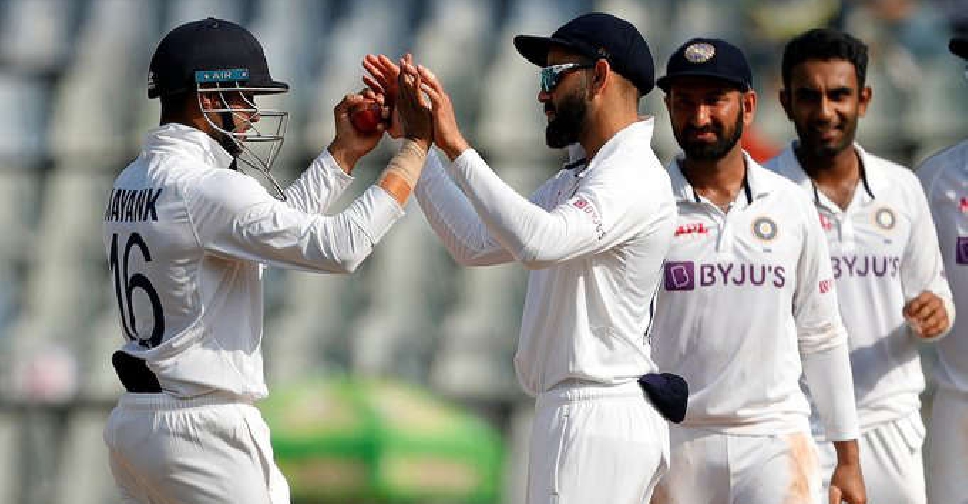 India's spinners wasted little time in removing New Zealand's remaining batters on Monday to thrash the tourists by a record 372 runs in the second test at the Wankhede Stadium and secure the series 1-0.

It was the biggest margin of victory by runs for India in a home match, eclipsing their 337-run win against South Africa in a Delhi test in 2015.

With the series victory, India also avenged their defeat to New Zealand in the final of the inaugural World Test Championship in Southampton in June.

Rahul Dravid, India's newly-appointed head coach, said the score did not reflect how hard India had to work for the series win, after the first test in Kanpur ended in a draw.

"I know this result looks a bit one-sided but right through the series, we've been made to work hard," said Dravid.

"There have been phases of the game where we've been behind and had to fight back. Credit to the team for pulling themselves out of some difficult positions."

Spin-bowling all-rounder Jayant Yadav did most of the damage on the fourth morning, picking up 4-49 -- his career-best figures -- to cut through New Zealand's middle and lower order at the sun-bathed ground overlooking the Arabian Sea.

With just a few hundred fans present in the stands to cheer the team on, Ravichandran Ashwin took the final wicket to finish with 4-34 as New Zealand were all out for 167 in their second innings, chasing 540 for victory.

The wily off-spinner took eight in the match and was adjudged player of the series for his 14 wickets in the series.

Ashwin is the world's leading wicket-taker this year with 52.

Opening batter Mayank Agarwal, only playing because of injuries and others being rested, picked up the player of the match award for his 150 in the first innings and 62 in the second in Mumbai.

It was also a happy return to the side for captain Virat Kohli, who was rested for the three-match Twenty20 series and the drawn first Test in Kanpur.

"To come back with a win again it's a great feeling as a team, and for me returning as captain as well," he said at the presentation. "It was just a clinical performance, something we've seen from our team time and again.

"You want individuals to step up and I think in this match they did."

New Zealand's dogged batters had denied India victory in the first test after their last pair hung on for 52 balls in a thrilling final session.

But they were unable to show the same kind of resistance on Monday with India needing just 43 minutes in the first session to wrap up the win after New Zealand had resumed on 140-5.

Tom Latham, leading the side in place of the injured Kane Williamson, said the tourists were fighting an uphill battle after being bundled out for 62 in their first innings in reply to India's 325.

"Disappointing performance, we always knew it was going to be tough coming over to these parts of the world. Getting bowled out for 60 puts you right behind the eight ball," Latham said.

"Credit certainly has to go to India, they know these conditions very well and played a great game."