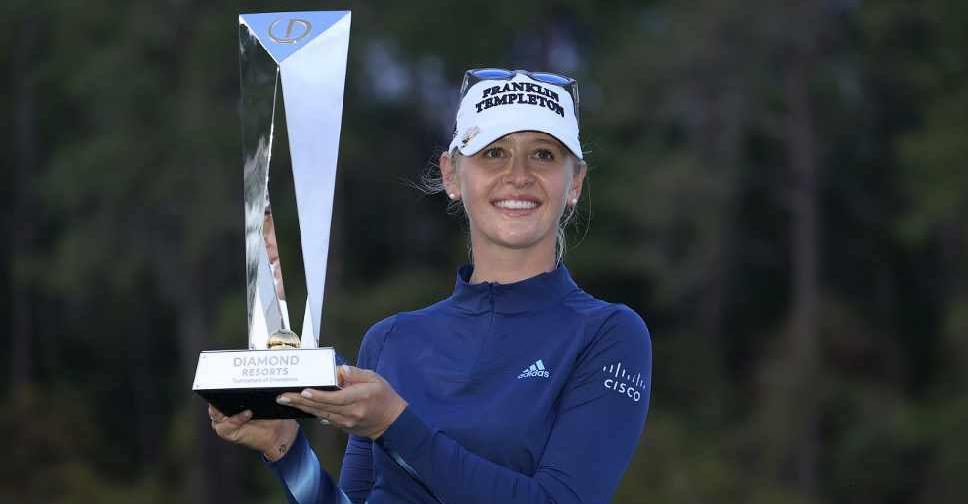 Jessica Korda followed up a sizzling 60 on Saturday with a playoff win over Danielle Kang on Sunday to capture her sixth career LPGA Tour victory at the Diamond Resorts Tournament of Champions at Lake Buena Vista, Fla.

Korda carded a final-round 66 to go 5-under par on the day and tie Kang at 24-under 260 for the tournament, then drained a long birdie putt on the par-3 18th in the first hole of the playoff to seal the victory.

"Amazing. It was obviously a huge grind," said Korda, who was also playing with younger sister Nelly on Sunday. "Danielle was playing so solid, and then Nelly started to make a bunch of birdies. I was like, ‘Oh, my gosh. What's happening?'

"I knew that I was going to have to go low today, and then Nelly started to go low and I was like, ‘I need to start to go low.' It was just a crazy, crazy day. Crazy two days. Shooting 60 yesterday, getting myself back into contention after bogeying three holes in a row to finish my second round. Crazy week."

For the 27-year-old Korda, who became the sixth LPGA golfer to record a 60 or lower on Saturday, the win marked her first since the 2018 Honda LPGA Thailand and the fourth time she's won in her season debut.

After a slight bobble with a bogey at No. 3, Korda was able to gain some ground with back-to-back birdies on Nos. 6 and 7. She found her groove on the back with four birdies over five holes on Nos. 13-17, then waited for Kang to finish to see if extra holes were necessary.

It was undoubtedly a disappointing finish for Kang, who started the day with a two-shot lead and seemed primed for a low score when she carded a birdie at the first. She racked up two more birdies at Nos. 7 and 14 but then made her first bogey of the week -- as well as her first three putt -- at 15. She rebounded with a birdie at 17 and made a testy 4-footer for par at 18 to force the playoff.

"I really didn't have a high today," said Kang, who lamented the little prep time she had prior to the tournament. "I hit one good shot that I really liked was on 12. I mean, that was my first solid shot.

"That last actually playoff hole shot was awesome. ... (The) last three days were, you know, more comfortable and it was easier, but today when it comes down to it, when I had to execute, I just didn't have the time behind me in it."

Nelly Korda fired a bogey-free 64 to finish alone in third at 22 under. Rounding out the top five were South Korea's In Gee Chun, who shot 67 and finished at 17 under, while Angela Stanford (65) and Cheyenne Knight (66) finished tied for fifth at 16 under.

Defending champion Gaby Lopez (71) of Mexico finished with a 69 to tie for 11th place at 11 under.

"Sometimes I feel like maybe I play better when I don't play as much," said Fish, who has won twice previously. "I don't have as much in my head to think about and, yeah, I hit the ball great all week. Made some good putts and shot some pretty low rounds for the most part."